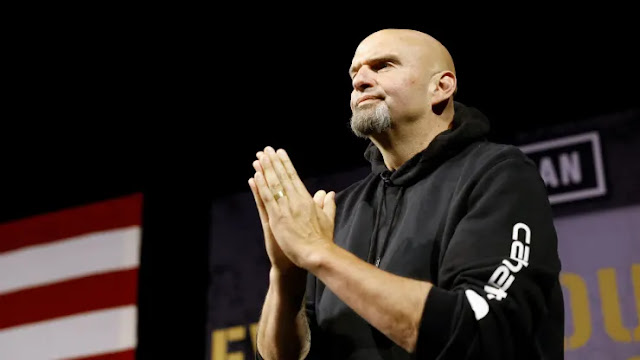 The sole faceoff between Fetterman, the progressive former Braddock mayor, and Oz, the celebrity doctor backed by former President Donald Trump, marked the climax of one of the most important races of the Nov. 8 midterm elections.

It also put a spotlight on Fetterman’s continued struggles after he suffered a life-threatening stroke in May that took him off the campaign trail for months.

While the Democrat’s doctors say he is recovering well, his lingering auditory processing issues have required him to rely on a live closed-captioning system in recent interviews, as well as in Tuesday night’s debate.

But even with the technological aid, Fetterman appeared to have significant trouble forming some sentences and delivering cogent responses throughout the hourlong event in Harrisburg.

He acknowledged his difficult recovery at the start and end of the debate, saying his campaign is “all about fighting for anyone in Pennsylvania that ever got knocked down and had to get back up again.”

Fetterman’s own campaign had tempered expectations in advance of the debate, warning that “this isn’t John’s format” and that the use of closed-captioning could lead to awkward moments.

“It’s clear that the people of Pennsylvania have John’s back in this race,” Fetterman campaign manager Brendan McPhillips said in a press release announcing the post-debate fundraising windfall.

“They stepped up tonight with a gigantic show of support for John and his debate performance. We’re honored and grateful for the support heading into the last two weeks of the race,” McPhillips said.

The candidates fielded questions about crime, economic and social issues and their own backgrounds during the live debate.

On abortion, a major issue in the midterms following a Supreme Court ruling overturning Roe v. Wade, Oz came under fire from critics watching the debate for saying “local political leaders” should have a voice in abortion decisions. “I want women, doctors, local political leaders — letting the democracy that’s always allowed our nation to thrive — to put the best ideas forward so states can decide for themselves,” Oz said.

Fetterman, meanwhile, appeared tripped up when asked to reconcile his current support for fracking with his previous claims that he has “never” supported fracking.

Each candidate also repeatedly accused the other of lying, echoing the aggressively rancorous tone that has defined the pivotal Pennsylvania Senate race for months.

Both Democrats and Republicans see the swing state seat as a must-win contest on the path to controlling the Senate.

Fetterman and Oz are competing to succeed GOP Sen. Pat Toomey, who is retiring at the end of the term. The opening in Pennsylvania, where President Joe Biden beat Trump in 2020, gives Democrats one of their best chances to flip a Republican-held seat and cling to their razor-thin Senate majority through an unfavorable political cycle.

With Election Day less than two weeks out, the candidates appear to be in a virtual dead heat, according to averages of recent polls compiled by RealClearPolitics and FiveThirtyEight.