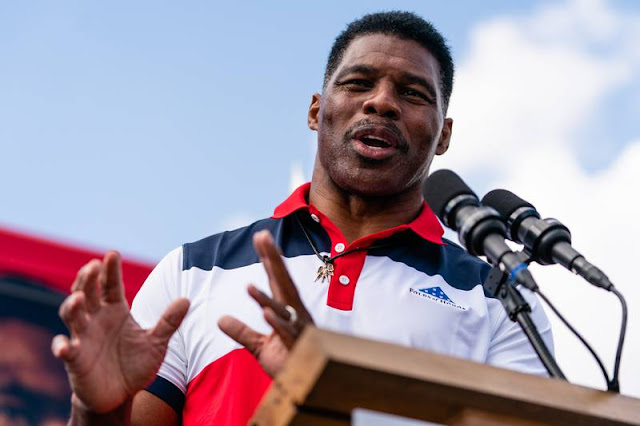 Republican Senate candidate Herschel Walker’s bus tour rolls into Walton County this afternoon: the former Bulldog football star will be joined by Texas Senator Ted Cruz in a rally set for 2 o’clock in Monroe. We are now twelve days away from Walker’s showdown with Democratic incumbent Raphael Warnock. Early voting continues through November 4.

From the Associated Press…

A woman came forward Wednesday to accuse Herschel Walker, the anti-abortion Republican running for U.S. Senate in Georgia, of encouraging and paying for her 1993 abortion — an accusation that came just weeks after a former girlfriend said he did the same for her in 2009.

Walker dismissed the newest allegation as “foolishness” and “a lie,” similar to his vehement denials earlier this month of the abortion alleged to have happened 13 years ago.

“I’m done with all this foolishness. This is all a lie, and I will not entertain any of it. I also did not kill JFK,” Walker said in a statement later Wednesday.

The second accuser, identified only as “Jane Doe,” spoke to reporters via an audio Zoom call arranged by her lawyer, Gloria Allred. The woman alleged that Walker, a former college and professional football star making his first bid for public office, pressured her into an abortion and paid for one after she became pregnant during their six-year relationship while he was married to his first wife.

“The reason I am here today is because he has publicly taken the position that he is ‘about life’ and against abortion under any circumstances when, in fact, he pressured me to have an abortion and personally ensured that it occurred by driving me to the clinic and paying for it,” the woman said. She said she was not revealing her identity because she fears “reprisals against myself, my family and my livelihood.”

“I do not believe that Herschel is morally fit to be a U.S. senator and that is the reason why I am speaking up and providing proof,” she said.

She said partisan allegiances were not a factor in her decision to come forward. She called herself a registered independent and said she voted twice for Donald Trump, the former Republican president who has endorsed Walker.

The second round of abortion allegations against Walker returned the issue to the forefront of the campaign in the final two weeks before the Nov. 8 elections. Walker is competing against Democratic Sen. Raphael Warnock in a tight race that could help determine party control of the Senate.

Walker, campaigning Wednesday in north Georgia, seemed to blame Democrats for the latest accusation, much as he did the first, saying in a written statement that they “will say and do anything to hang on to power.”

“Well, I’m Herschel Walker, and they picked the wrong Georgian to mess with,” Walker wrote.

Allred, speaking to reporters in her Los Angeles office, detailed, among other items, cards that she said Walker gave her client and a hotel receipt from Minnesota. Allred played audio of what she described as a telephone message that Walker allegedly left her client in 1992 after he had arrived in Europe as part of the U.S. Olympic bobsled team.

Walker dodged a question on Fox News on Wednesday night about whether he knew who the second accuser was, repeating that it was a lie and saying that his campaign had “moved on.”

When The Daily Beast broke the story this month of the first abortion allegation, Walker insisted he had no idea who could make such a claim, but that was undermined by a follow-up report in which the woman identified herself as the mother of one of his children. The child was born two years after the 2009 abortion.

Her evidence included a $575 receipt for an abortion, along with a get-well card signed by Walker and a personal check for $700 from the multimillionaire celebrity athlete. The check is dated five days after her abortion receipt.

On Wednesday, Jane Doe said Walker gave her cash to have an abortion after she told him she was pregnant. She alleged that she first went to a clinic alone but was unable to go through with an abortion. She said Walker was “upset” when she told him and he insisted they return the following day. She said he drove her to the clinic that day, waited in the car while the procedure occurred and then took her to fill prescriptions.

Allred declined to discuss the cost or any records of the alleged abortion, “at least at this time.”

Walker’s responses to The Daily Beast’s stories evolved from absolute denials to suggesting the signature on a get-well card wasn’t his to suggesting he did send the woman money but that he didn’t know it was to cover an abortion.

Doe said she heard Walker’s denial that he ever signed anything with a lone initial “H,” as the get-well card was signed. She said she knew that wasn’t true because he had signed cards to her that way.

The first woman has not been identified publicly, asking that her name not be used out of concern for her privacy. She said she is a registered Democrat who is speaking out because of what she called Walker’s hypocrisy over abortion rights.

She has spoken to multiple media outlets, revealing herself to be the same woman who filed a paternity suit for child support in New York family court. She has also alleged that Walker encouraged her to end their second pregnancy, though she refused, and that Walker has seen their son only a handful of times.

Walker’s campaign has since shared with NBC News texts between his current wife and the woman acknowledging his relationship to the child.

Walker promised to sue The Daily Beast after its initial story on the abortion claim was published Oct. 3. As of Wednesday afternoon, Walker had not confirmed that he has taken any legal action against the outlet.

The reporting has put Walker on the defensive both about his claims of being a family man and his previous support for a national abortion ban, without any exceptions. That’s a notable position because the Supreme Court in June ended a constitutional right to an abortion and Congress has been discussing federal legislation to set a national regulation.

During the primary campaign, Walker was consistent about his absolute opposition to abortion. He repeated that approach after winning the nomination but has since shied away from it, trying to turn the issue back on Warnock by suggesting the Democrat supports no limits on abortion access.

In their lone debate, Walker denied his previous position and said he has settled on backing Georgia’s new state law that bans abortion at six weeks of pregnancy — before many women know they’re pregnant. That law includes exceptions for pregnancies involving rape, incest or threats to a woman’s life or health.

Walker has been dogged throughout his campaign with intense scrutiny of his past.

He’s been accused of repeatedly threatening his ex-wife’s life, exaggerating claims of financial and business success, suggesting he’s been a sworn law enforcement officer and overstating his role in a for-profit program that is alleged to have preyed upon veterans and service members while defrauding the government.

After a story by The Daily Beast in June, Walker acknowledged the existence of three children he had not previously talked about publicly, including the son of the woman who first accused Walker of urging her to have abortions.

More than 1.1 million Georgia voters have cast ballots so far ahead of Election Day, either by mail or through advance in-person voting that began Oct. 17 and continues through Nov. 4. That is about 50% higher than at this point in 2018, the last midterm election.

With a Libertarian nominee also on the ballot, it remains possible that neither Warnock nor Walker attracts the required majority to win outright. In that case, the two would meet in a Dec. 6 runoff.